St Michael at Plea from the south west 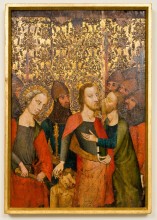 The church as it stands is almost all of the 15th century with some restorations subsequently. The tower and chancel probably predate the nave (cf. Peter Hungate, Michael Coslany) and are on very different alignments. The nave, complete with its vandalised angel roof, seems to date from the mid-15th century. There are indications that both north and south transept arms were envisaged at the same time as the plinths are continuous. As built, the northern transept is deeper, perhaps because it housed the archdeacon’s court. The shallow southern arm compensates by adjoining a south chancel chapel which extends it to the east.